What is a Phobia? 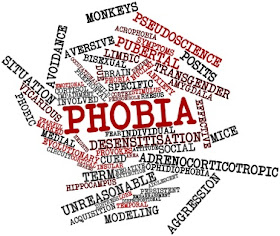 A phobia is a severe anxiety or fear of something that in actuality may not pose any serious or actual danger take for instance the fear of bugs. A person that has phobia for something (could be anything) usually shows general signs of phobia such as getting distressed, scared or causing irritations on their skin like goose bumps, skin changing colour, increased heart rate, sweating, dizziness and so much more.
Phobia is the general name for these extreme and unnecessary fears, to be more specific on that type of phobia, there must be a prefix to the word 'phobia', an example is Trypophobia, meaning the fear of holes, another is type of phobia is Astraphobia meaning the fear of storms and so on it goes.

What Are The Causes Of Phobia?
A phobia is usually starts at teen ages and are very rarely seen to start during adulthood, at this stage a phobia is very easy to have and once had can be very hard to get rid of. The causes of phobia are very similar and are mostly contacted in similar ways but depend according to a person and individual personality. This is why others around you feel so confused when you're screaming at the top of your lungs for seeing say, a spider if you're archnophobic. You must as well have a friend who has a phobia for what you don't and can only imagine how they feel when exposed to the phobia.
The major causes of phobia include the following;
* Witnessing a friend's or family member's phobia - this is especially if such person is of older age. My 3 year old cousin now has a phobia for cockroaches after seeing how violently my sister ran outside at the sight of a cockroach.
* Traumatic experience - if you've ever had an accident on sea for example and barely made it alive, you'd probably never want to set foot on a boat ever again but then again, not all people.
* Heredity - yes! Maybe you inherited your grandpa's greatest fears!
* It is also believed that some phobias are programmed there by the brain for survival reasons. A person scared of clustered holes - trypophobia for example, is believed that a possible reason is because of a deadly octopus having hole-like suctions which are actually very poisonous, among others.

Like the causes of phobia, most phobias display very similar symptoms and they're are all feelings we feel when we're afraid, such symptoms or signs of phobia include;* Increased heart beat
*sweating
*diziness
*trembling and shaking
*headaches
*dry mouth amoung others
In summary, everybody has what they fear or is afraid of but when it starts affecting your daily life or makes you feel ridiculously  uneasy, then it might be a phobia. Take for example,

Sam's Fear Of Heights;
Meet Sam, a responsible father of 2, Sam appears to be having Acrophobia - the fear of heights phobia. Due to Sam's phobia, he cannot by himself do some manly jobs in the house like change the kitchen bulb since he'd need to climb an higher surface to do so, he's tried but keeps freaking out. Even when his kids' ball gets stuck on a tree, he'd be left with no choice but to make up a sheepish excuse or beg the neighbours because he just can't bare the sight from the height of the tree due to this phobia. No traveling by plane for Sam, he prefers getting 10 hours late to the venue by road.
Now if you feel your case of fear is similar to that of Sam's not just for heights but anything else, are you avoiding your responsibilities or daily routines due to the presence of something you are not pleased with? Then you might want to consider getting help on how to overcome phobia.


What Are the Types of Phobia Existing?